Barbershop is often sung in quartets – one voice in each pitch. The following quartets were formed by the Women in Black and consist entirely – as in the case of Somersault – or partly – as in The Bees’ Knees – of singers from the choir. 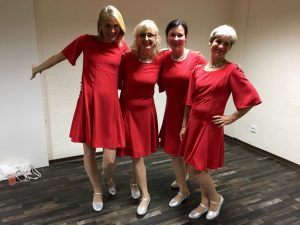 Somersault – Francis, Irmelin, Melissa and Nicola are singing their hearts out as a barbershop quartet. A Somersault is something we all enjoy: in that spirit we strive for spirited, artistic, and fun qualities in our program. In 2018 we will compete for the second time in the Coesfeld Cup at Oberwesel. 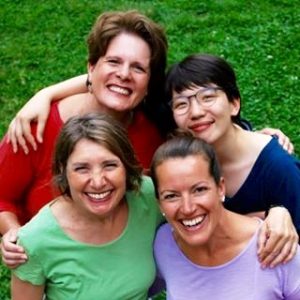 Susan and Eileen (above f.l.), Chris and Kathi (below f.l.). Photo: private

The Bees’ Knees are a German-American barbershop quartet in Berlin. Since their founding in October 2012 they have built up an extensive repertoire of pop songs sung in the barbershop style, including toe-tappers, swing ballads, and barbershop standards. They enjoy singing at various private and public occasions and also compete in the annual BinG Coesfeld Cup contest.